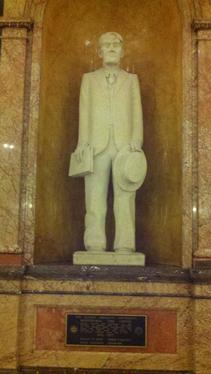 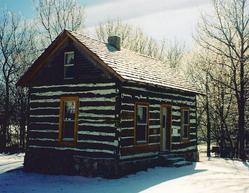 This statute of Arthur Capper at Kansas State Capitol in Topeka, Kansas. 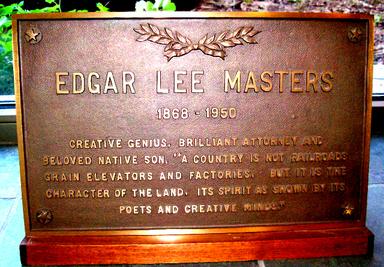 How Did Garnett Get Its Name?
Garnett was named in honor of W.A. Garnett, who was a prominent citizen of Louisville, Kentucky.  He financed the colony and bought a flourmill and sawmill for the new town. A man named George W. Cooper actually organized a group of men to create a town company consisting of himself, W. A. Garnett, R.B. Hall, George Dunn and Theodore Harris. Cooper drew an elaborate blueprint of Garnett that depicted steamships upon the Pottawatomie.  A plat for the town was filed August 1, 1857 and the town company soon staked out lots.

Originally Dr. Cooper attempted settlement of Garnett in a different location, Ianthe Creek, because he wanted to create a town in the geographical center of Anderson County.  However, George A Dunn, the surveyor, suggested a spot six miles north that contained a nice spring.

Gerth Cabin - Greeley, Kansas
Valentin Gerth was one of the first two settlers in Anderson County, died August 4, 1913.  He is buried in the Greeley City Cemetery.  The Gerth Cabin, located inside the city limits of Greeley, has historic significance.  The cabin was involved with the Underground Railroad movement to free slaves.  Eleven slaves freed at Vernon County, MO on December 28, 1858 by John Brown and his men were known to have been hidden in the Greeley area and is linked to the Gerth Cabin.  A baby boy, John Brown Daniels, son of escaped slave Jane Daniels, was born and said to have been hidden for a time under the Gerth Cabin.  The cabin has been restored and can be toured by appointment (785) 867-2966.  Don’t miss driving over the Wagon Bridge when you visit!

Harry and Beatrice Houdini held a séance at the Opera House in Garnett in 1897 in hopes that Mrs. Houdini would reveal who had murdered a local Anderson Countian.  The show brought a tremendous crowd as local history books report.  The show was very suspenseful and the crowd enjoyed it, although the murderer was never revealed.  Houdini later returned to Garnett and escaped from the city jail, as well as a lock box.

DID YOU KNOW?
Garnett had a college back in the 1870’s.  Garnett College had no campus or building.  Classes were held in the Presbyterian Church (now home to the Thelma Moore Playhouse) located at Fifth Avenue and Walnut Street.

Holy Angels Catholic Church, one of the most beautiful structures in Anderson County, opened in 1916 and cost $15,000 to construct.

The White Way, traditionally known as Fourth Avenue in Garnett, was formally opened with its large islands and decorative lampposts on November 2, 1916.

Arthur Capper
In a small, humble brick home on East Fifth Avenue, one of Kansas’ most famous persons was born.  Arthur Capper was born on July 14, 1865 in Garnett.  At the age of 14, Arthur started work at the Garnett Journal newspaper, where he was printer for one dollar a week.  He graduated from Garnett High School in 1884 and left to pursue a career as a reporter for the Topeka Capital.  In time, Capper built the Capper Publishing Company which included two daily newspapers, several weekly papers, farm papers and two radio stations.  He also created the Capper Foundation for Crippled Children.

On November 25, 1892, Arthur married Florence Crawford, daughter of third Kansas Govenor, Samuel J. Crawford, who was also from Garnett. Arthur Capper ran for office and served as Kansas Governor for two terms (1915-1919).  He also served Kansas in the U.S. Senate for five terms (1919-1949).  He was a leader for farming states and was the first to promote pig and canning clubs, just prior to the creation of 4-H Clubs.  Arthur Capper died in Topeka on December 19, 1951 at the age of 86. 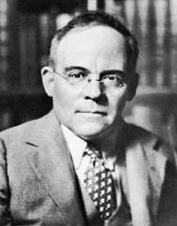 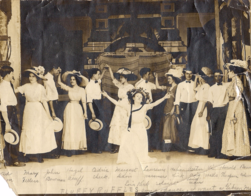 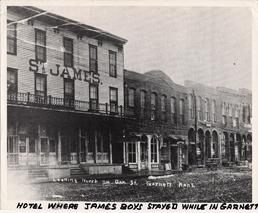 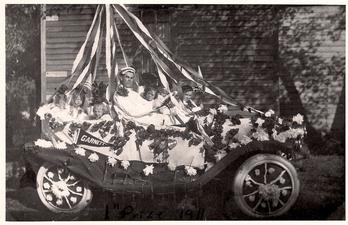