IN 2010, GARNETT TOURISM NOMINATED ARTHUR CAPPER AS ONE OF THE 8 WONDERS OF KANSAS - PEOPLE!  He made it to the final 24 and he received Top 8 honors.  We have gained new friends and new found relationships, however, and we thank the Kansas Sampler Foundation for their work and dedication to promoting Kansas. 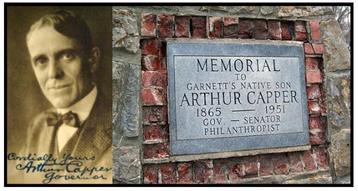 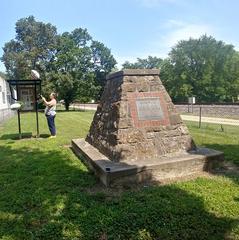 ​About Arthur Capper…
In a small, humble brick home near the railroad tracks at East 5th Avenue and Cedar Street, one of Kansas’ most famous persons was born.  Arthur Capper was born on July 14, 1865 in Garnett.  At the age of 14, Arthur started work at the Garnett Journal newspaper, where he was printer for one dollar a week.  He graduated from Garnett High School in 1884 and left to pursue a career as a reporter for the Topeka Capital.  In time, Capper built the Capper Publishing Company which included two daily newspapers, several weekly papers, farm papers and two radio stations.  He also created the Capper Foundation for Crippled Children.

On November 25, 1892, Arthur married Florence Crawford, daughter of third Kansas Govenor, Samuel J. Crawford, who was also from Garnett.  Arthur Capper ran for office and became the state’s twentieth governor and the first native-born Kansan to be elected governor on January 11, 1915, serving as Kansas Governor for two terms (1915-1919).  He also served Kansas in the U.S. Senate for five terms (1919-1949).  When Arthur Capper retired from the U.S. Senate in 1949, he was both the oldest senator at 83 and the longest-serving with 30 years until Strom Thurmond, of South Carolina, bested Capper's record of longevity in the Senate. Thurmond had 48 years in the Senate beginning in 1954 and retired at age 100.

During his time in politics, he was a leader for farming states and was the first to promote pig and canning clubs, and was instrumental in the creation of 4-H.  Today, there are more than 6 million young people across America involved in 4-H.   The Capper-Ketcham Act of 1928 saw to federal funding of agricultural extension work on a permanent basis and it appropriated funds for 4-H clubs to educate rural youth in the field of agriculture.  The Capper-Volstead Act of 1922 is often called the “Magna Charta” of farm cooperatives.  The Capper-Tincher Act of 1922 provided federal government regulation of grain futures trading and exchanges and later included other commodities.  The Capper-Lenroot-Anderson Agricultural Credits Act of 1923 laid the groundwork for future policies granting agricultural credits and establishing lending agencies in the field of agriculture. He also had a prominent role in the progressive movement called the “farm block” during the 1920’s.

DID YOU KNOW... Arthur Capper was born in Garnett, Kansas.  He was the 20th Governor of the state and the first person born in Kansas to serve as the state's governor. Highway signs are now located on US 59 & US 169.
DOWNLOAD NEW BROCHURE ON ARTHUR CAPPER​

UPDATE IN 2021: With the help of some special volunteers, planning is underway to raise funds and create a park at the Arthur Capper Memorial. More information to come soon.