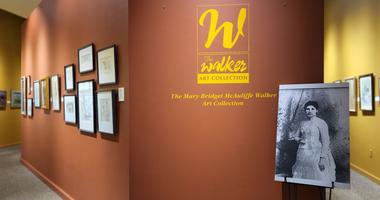 Housed within the new Walker Art Gallery lies the Mary Bridget McAuliffe Walker Art Collection. Established in 1951  by Maynard Walker in honor of his mother and given to the city of Garnett, Kansas.
This collection of mostly early twentieth century American paintings, sculptures, prints and drawings is renownly one of the most extraordinary art collections in the Midwest. The collection includes works by John Steuart Curry, Robert Henri, Arthur B. Davies, Walt Kuhn, Henry Varnum Poor, Luigi Lucioni, Boardman Robinson, John F. Carlson, Kenneth Callahan and Theodoros Stamos. Artists from the Midwest include Frederick James, Merrill Gage, Pauline Shirer, David Overmeyer, Adeline Peers, John F. Helm, Dwight Kirsch and his son, John Kirsch. England is represented by the animal drawing by John Skeaping and a collection of caricature drawings of cats and dogs by Louis Wain. George Grosz, Edouard Manet and Jean Baptiste Corot are European artists whose works are also included.
Some may call it a stroke of luck that the Walker Art Collection came to be in Garnett. Mr. Walker, a prominent art dealer in New York during the 1930’s and 1940’s, had received a letter from Marguerite Jackman of Garnett, who was compiling letters of famous persons. In the letter she asked him if he were born in Garnett and if he would write a letter verifying that fact to be kept on file at the library. Mr. Walker responded with such a letter, then months later wrote asking if the library would be interested in having some of the paintings he owned, offering them on loan. Later, Maynard Walker gave them outright and then prompted the additional donations by artists and individual collectors.
The original Mary Bridget McAuliffe Walker Art Collection consists of 70 pieces. A new collection entitled, “The Garnett Art Collection” contains additions to the original collection of more than 140 pieces, including graphic by Joseph Albers, ceramic by Karen Karnes, and glass sculpture by Dale Chihuly.
At the entrance way to the Walker Art Gallery visitors will find the Garnett City Art Collection located in the West Wing Gallery. Displays of artwork created by local artists or by an occasional traveling exhibit can be enjoyed. These works of art are rotated on a monthly basis.
The Walker Art Gallery located at the west entrance of the Garnett Public Library, 125 West Fourth Avenue in Garnett, Kansas, and can be viewed daily. Docent tours are available by pre-arrangement and free of charge by contacting the Garnett Public Library, (785) 448-3388; email: garnettlibrary@yahoo.com. 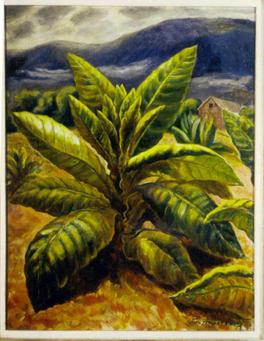 ​“In giving them up, I feel I have lost nothing, but rather, if from time-to-time some youngster or some oldster gains something by seeing them, I shall feel richer.”      - Maynard Walker