Garnett’s North Lake Park is visited by thousands of visitors each year for its unique history and variety of amenities that are not common to every community.

The North Lake Park consists of approximately 300-acres and is located inside the city limits of Garnett, Kansas. The creation of the park started with the construction of Lake Garnett which began on October 15, 1934 by Civilian Conservation Corps.  The project included a 48-acre (840 acre-feet) man-made lake with dam and spillway, a road, and the planting of over 300 cedar trees, lilac bushes, rose bushes and shrubs. Also encompassing the CCC project are two shelter houses, restrooms, a football stadium and swimming pool.  The project was finished in 1936.

The park found stardom as a national landmark in the late 50’s to early 70’s when the lake road became the 2.8 mile “true-road” course for 9 sports car races held from 1959 to 1972, sanctioned by the SCCA.  Many famous race car drivers and engine builders, such as Carroll Shelby, raced here.  History books tell of the famous 1963 Lake Garnett Grand Prix in which the peak attendance record was estimated at 75,000 people.  The racing history lives on today as KART (go-cart) races are held twice annually on the lake road, and annually on the sprint track located within the park.  Cruising Lake Garnett is a favorite past-time or custom of both the local residents and visitors.  A local car club, the Lake Garnett Cruisers, organized in 1991  annually host an auto and motorcycle show complete with a cruise or ceremonial lap around the lake in commemoration of the famous races.  When cruising Lake Garnett one must be mindful of its unique features which were fondly named by the Lake Garnett Racing Association:  Flat Iron Corner, North Bend, Muleshoe Corner, Red Dog Straight Away, Snyder Corner, The Chute, Clubhouse Bend, to name a few.

The amenities created by the CCC camp of the 1930’s are preserved today in the North Lake Park.  The City of Garnett owns the park and within it are some familiar and then yet some uniquely notable facilities.  The football stadium with rock wall and bleachers has been hosting high school home football games since its inception.  The Anderson County Fairgrounds are housed within the park.  While the park has a semi-private golf course, tennis courts, basketball courts, picnic areas and swimming pool with tot lot (playground), the unique facilities include sand volleyball courts, rifle/pistol shooting range, trap shooting range, tractor pulling arena, children’s fishing pond, skate park and RV campsites.
The North Lake Park is a prime special event location, hosting

several events each year, including the Anderson County Fair,

and an array of RV camping groups, Boy Scout and Girl 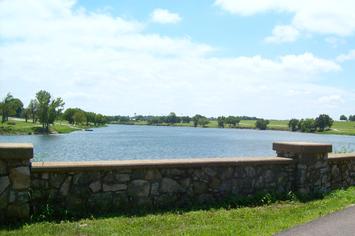 Other Amenities and Facilities within NLP: