Tribute Concert to Cody Gettler by Quite Frankly at Libertyfest July 2
Garnett, KS: The City of Garnett invites you to Libertyfest at Lake Garnett on Saturday, July 2nd . New this year, is a concert featuring Quite Frankly from 6:30 to 8:00 p.m.

The band is sponsored by Trade Winds Bar and Grill and Jason Sheahan as a tribute to the late Cody Gettler. The owner of Trade Winds, Angie Smith, is Cody’s mother, while Jason Sheahan was chosen to fill the vacancy left by Cody on the Garnett City Commission.  Commissioner Cody Gettler helped with the 2021 Libertyfest by helping take donations at the park entrance. Cody was very active in the community and loved his hometown, Garnett. He was a friend to everyone he met. Cody passed away last November. He was only 25.

Quite Frankly – About the Band
The band, Quite Frankly, is a local band comprised of Scout Matthews, Jolson Robert, Eli Peterson, Gavin Robert, and Carolyn Armstrong, who play and perform beyond their years.
Scout-
Scout Matthews (18) from Overland Park KS is the bass player of Quite Frankly the
Band. She has been playing bass for over 8 years and now teaches her passion at
School Of Rock Blue Valley. Outside of playing bass you will see scout hanging out with her pets including her two dogs, tortoise and bearded dragon.  She's planning to attend JCCC in the fall and continue to play music.
Jolson-
Jolson Robert (21) has been playing in bands for 5 years in his hometown Osage, KS. In Quite frankly, Jolson sings, plays guitar, and occasionally is seen playing the
saxophone. As he entered adulthood, Jolson moved to the Kansas City area to pursue his music career full time. When not working on songs for Quite Frankly, he is working on songs for his solo project, “Jolson and the Fear of Snakes.”
Eli-
Eli Peterson (17)  is the guitar for Quite Frankly. Eli has been playing guitar for 8 years starting in his hometown Garnett, Kansas. Outside of Quite Frankly Eli enjoys riding motorcycles, working on cars, playing music with his family band, and spending time with his friends and family.
Gavin-
Gavin Robert (16) Jolson's little brother, has been playing the drums for 4 years starting out in Osage, KS. Gavin will be a junior at Osage High School next year where he is involved with theatre and forensics. In his free time, Gavin can be seen playing the piano, mountain biking and spending time with his friends and family.
Carolyn-
Carolyn Armstrong (17) has been singing for 8 years and has been performing around the Kansas City metro area for 6. Carolyn will be a senior at Shawnee Mission South High school next year where she is involved with National Honors Society and Theatre. Outside of school and Quite Frankly, Carolyn is involved with Stage Right Performing Arts as a member of their show choir and is pursuing her passions for veterinary medicine as a volunteer at State Line Animal Hospital.

The band is growing in popularity and the City of Garnett was lucky that they had an
opening on January 2 nd , as they are booked up and in demand. This high energy band has played shows in the KC area, Starlight Theatre, The KC Royals, KU Athletics official tailgates, Sprint Center, and even Nashville and Chicago. From Led Zeppelin, the Allman Brothers to Frugazi and Weezer, as well as music they have penned of their own unique American rock’n’roll, Quite Frankly is a crowd pleaser wherever they go.
There will be food trucks in addition to the concert, so bring your appetite and sample some delicious food from food trucks and trailers, including Nacho’s, Chick-Fi-La, Carolyn’s Kitchen, Masons and Wood’s BBQ. Hope Anthem Church will also be on side with free sno cones.
The fun begins at 5:00 p.m. with music in the North Lake Park by Everett Cox, followed by the tribute concert 6:30 to 8:00 p.m., and community fireworks display over Lake Garnett presented by Rainbow Fireworks at approximately 9:30 p.m. (sunset/dark).
Freewill donations will be accepted at the entrance to the park. Donations can also be dropped off or mailed to Garnett City Hall, 131 W. 5 th Avenue, PO Box H, Garnett, KS, 66032. No tax dollars are used to fund this event.

Your support is appreciated! 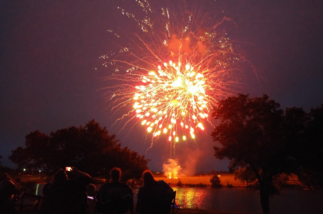 Libertyfest has been a family friendly event in Garnett for over 20 years! Our display has been rated as one of the top shows in the state! 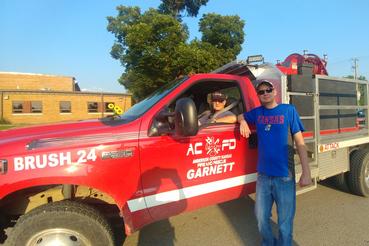 Know when and where you can shoot fireworks... 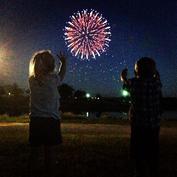 Please take this survey so that we can continue to improve your experience at Libertyfest!

THANK YOU TO EVERYONE WHO ATTENDED AND GAVE A DONATION!

None of this would be possible without the support of our City and County Commissioners, City Employees and YOU!

We are now accepting donations for Libertyfest. If you would like to support this event and keep it in Garnett, please donate!